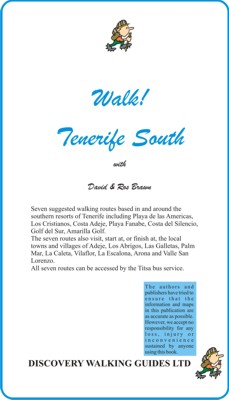 2018 sees our 30th Anniversary since we published our first walking route. 'Geranium Walk' exploring the seafront promenade connecting the Costamar Apartments in eastern Los Cristianos all the way through to Puerto Colon/San Eugenio/Torviscas areas of western Playa de las Americas. Written as a 'spoof' hiking adventure Geranium Walk took readers on a 10 kilometre promenade adventure without ever having to cross a public road. Published in the Tenerife local press this became the island's most popular walking route and when the authorities got around to naming streets the coastal promenade was officially named 'Geranium Walk'.

More walking routes followed that took us out of the resorts into the dramatic countryside. Tenerife South Walking Guide was published as Discovery Walking Guides first guide book. More research and more routes resulted in West and North guides which were then combined into one book to create the first edition of Walk! Tenerife.
More research produced more adventures which in turn produced new editions of Tenerife's favourite walking guide book right up to our latest edition.

Unfortunately more adventures means we have had to be selective in deciding which routes were included in the latest Walk! Tenerife resulting in our early 'family friendly' routes being dropped from our latest guide book.
We did not want to see these routes go 'out-of-publication' so we are making available as a free download in 'Walk! Tenerife South'

If you are a first time visitor to the south of Tenerife, or simply wish for some easy walking in and around your resort then download our Walk! Tenerife South pdf edition.

Click on one of the links below to change places: